Ashford used to be a small town, when I was young I remember playing in the fields and exploring the surrounding woodland. Ashford was a community with a small local market in the centre of the town. But this small market town has become a deserted victim of the pandemic, with glaring glass shopping centres reflecting the ghosts of the retail market. The old areas of open space have been bulldozed and the field that was home to my rope swing is now a housing estate that I actually lived in a few years ago. The legacy of Ashford now seems be a victim of poor planning and Brexit.

There was always going to be a loser of the Brexit process, that is not to say that the UK cannot also benefit from leaving, it is just to point out that after decades of membership, it was not going to be a one step exit. Unfortunately for Kent, we became that loser. You only need to attempt to drive from Folkestone to the new ‘improved’ junction 10A in Ashford to understand there are serious issues that are only going to worsen as the roads become busier. The government seem to think they have pulled off this awful plan, but in reality all they what they have done is delay the inevitable. The pandemic stunted traffic but as traffic resumes, the cracks in the design are becoming apparent. Kent County Council have attempted to justify the work by Highways England but all those involved seem to have forgotten that in the post-covid world, the people of Ashford will still need to use their cars. 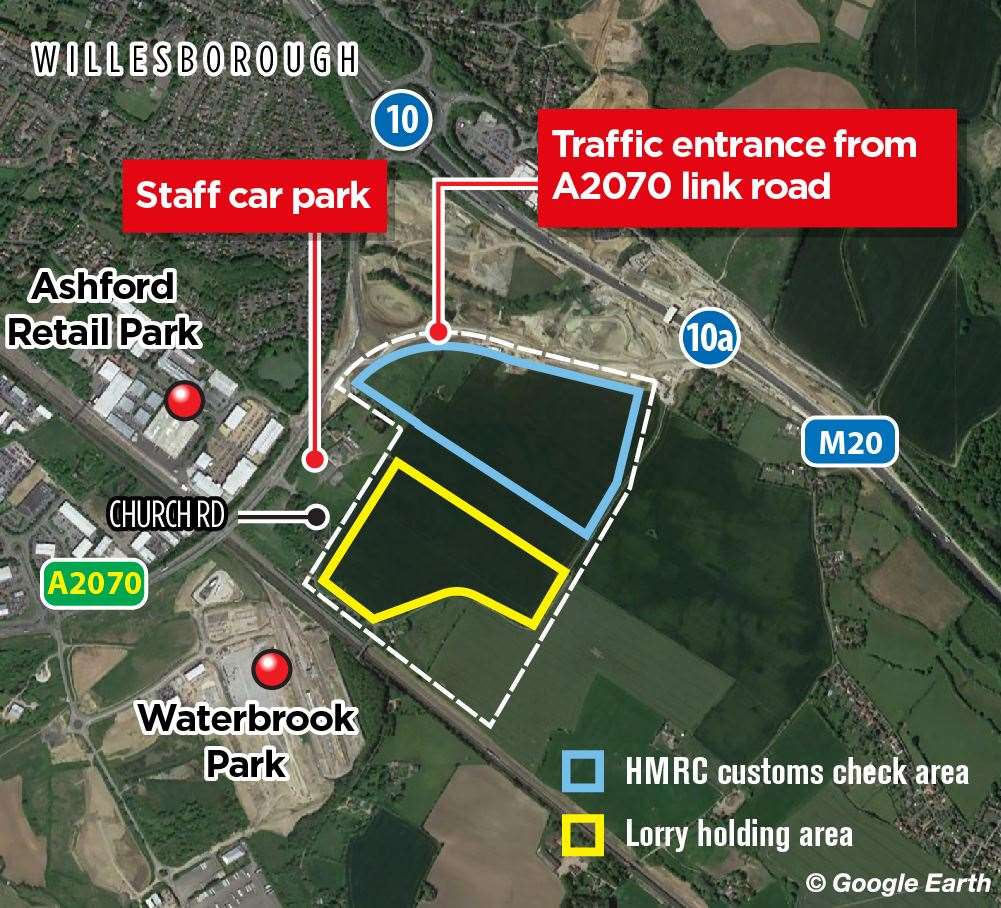 The government cannot secretly convert an entire town into a lorry park without someone noticing. That sly move that was made to secretly acquire a large area of land near Sevington and slowly transform it into a lorry depot has ruined the junction and it grabbed the attention a lot of people. As the Guardian reported, the people of Sevington had no say in this pollution park dumped on their doorsteps, leaving this small village very disappointed. I have to pass through this joke of a junction on a daily basis. I have spent hours stuck in a congested maze of traffic and these plans are responsible for me missing countless appointments. There is just no escape from the endless traffic lights, congestion and lorries, lorries that are everywhere!

And then we had Operation Brock. Not only can we not get around the town easily, we now can’t leave it either. Why is there a removable barrier that is extremely difficult to move and requires the closure of the entire junction each time some does just that? This causes every driver unmeasurable misery while providing no clear function. The stretch of motorway between Ashford and Maidstone has been limited to 50 MPH for what feels like an eternity. I have forgotten what it looks like without traffic cones and block barriers. There have been many times when the whole of the motorway has been closed for a weekend only to find that nothing has changed once it is reopened. At first I considered it may be an April fools prank but this has been going on for far too long now for this to be a joke.

Who is responsible for this poor planning? Has anyone been fired for creating the nightmare that is known as driving in and around Ashford? The William Harvey Hospital is on this junction and there were concerns originally raised about the delays in the ambulance journeys coming from Folkestone in the planning documents in 2017. These concerns were justified as ambulances now have to divert around junction 10A, get stuck in a queue of lorries trying to navigate their way into an incomplete lorry park, then hit the traffic from Ashford Retail Park and then go across to the old junction 10 just to get to the hospital. I wonder how this delay has impacted those patients who only have minutes to live. Not to mention that there are not as many ambulances available so this must have increased wait times.  I invite the Conservative party to come and stay in Ashford and commute, even just to Maidstone while the roads are reduced down to one lane. I then invite you to step out of your car at the end and tell me the positive benefits of this layout and your Brexit design. After a week or two of this journey I think the reality of what these roads have done to residents of Ashford will begin to sink in.

I understand that somewhere needed to take the brunt of Brexit but this proposal was not the answer. It has recently been reported by Kent Online that the Environment Agency won’t even comment on the impact this lorry park will have on the surrounding area. To add to this, the traffic has suddenly increase as the country unlocks and this combined with poor local planning saw the junction reduced down to one lane precisely when non-essential retail reopened. This decision was complete madness.

If the country wants to meet its carbon goals by 2050 a big recommendation would be to stop creating queues of engines which chug out more and more pollution. Especially next to a lorry park that itself will cause clouds of air pollution.  This issue was addressed in London with the congestion charges but it has not been considered when assessing the location and duration of clusters of roadworks.

With still no end date in sight, I am stuck with a decision to risk driving up to junction 10A to potentially sit in huge delays, or to drive the entire way through town, in stop start traffic, to get to a junction next to my house. I feel the damage is done in Ashford now, but please do not roll out this model across the UK with big claims of the success of the design. This is exactly what happened with the smart motorways which are now being considered as dangerous and have also caused huge delays, stress and congestion.

Perhaps the government should stop redesigning existing road networks and use their time towards meeting our carbon targets by investing into public transport which will reduce the number of vehicles on these roads. Maybe if the government reduced the amount of traffic then their design at junction 10A would finally work.

Brexit bulldozers have turned my town into a traffic nightmare