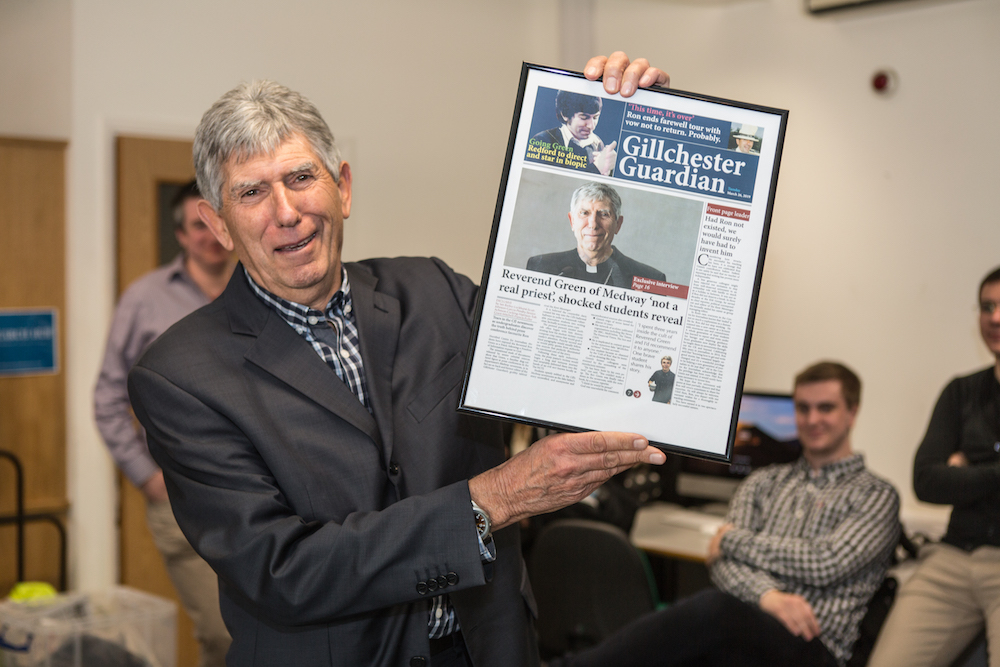 It's with great sadness that we have to pass on the very sad news of the death of Ron Green, one of the Centre for Journalism's most influential and admired figures.

Ron played a central part in establishing the culture of the CfJ, joining as a newswriting teacher soon after it was founded  and inspiring many cohorts of undergraduate and postgraduate students with his compassion, enthusiasm for news and lively teaching.

Before joining the Centre, Ron had a long career in local and national news including editing several Kent Messenger newspapers and its website, KentOnline.

His second career began after his retirement from the KM – not that anyone watching his teaching sessions would have known it. Ron was a passionate and energetic lecturer, who spent extra hours helping students to fulfil their potential. Long after graduating, students kept in touch with “Reverend Green” – so-called because of his habit of dressing as a vicar for an annual Halloween news-writing exercise.

There are few alums of the CfJ whose writing hasn’t been improved by Ron’s red pen – including me. I first worked with Ron as a young reporter in Maidstone in 2001. I never tired of making him squirm as I told students how inspirational he had been to me as my editor. Ron was a champion of communities, a believer in the power of local newspapers, and a thoroughly good and fair man. I never knew anyone who did not respect and like him. That’s a rare quality for someone in the editor’s chair.

Ron’s retirement in 2019 was marked with an old Fleet Street tradition. As he walked out of the Centre’s newsroom for the last time, students and lecturers gave him a “banging out”, hammering their desks in tribute.

But even a second retirement couldn’t put Ron off journalism – he continued to write as one of the Medway Messenger’s “Codgers” until March. And his final piece for KentOnline, researched with typical thoroughness, was published less than a month ago.

KentOnline has also published a tribute to Ron today.

Our thoughts are with his wife Paulene and his family.

There are hundreds of young reporters working today who carry a little of Ron’s journalistic DNA. The industry is better for it.

Update: We have collected the tributes to Ron that we saw on Twitter. Do let us know if we missed any.