Today is World Press Freedom Day.
Pity nobody told Dartford Borough Council Press Officer Lewis Kirnon.
As the clock struck midnight to usher in the day on which we honour those who fight for the right to bear witness to democracy, Mr Kirnon was ensuring precisely the opposite happened – by refusing two of our students entry to the borough’s election count.

Covering a count is something of a rite of passage for CfJ students. Through the years, hundreds of them have done that familiar all-night stint at general elections and local elections across the county. They have provided footage for ITV, the BBC and KMTV, as well as copy for newspapers and web sites across the county. They are well trained in the dos and don’ts, both technically and editorially. They know what to film and what not to film. They understand the law and Ofcom’s regulations inside out.
So it was with a degree of excitement that third year undergrad Jessica Sharp and her second year colleague Chloe Rose set off to cover the Dartford count as KMTV interns yesterday night.

As she always does for the counts being covered by interns, formidable Paul on Politics producer and CfJ lecturer Laura Garcia had ensured they made arrangements with press offices well in advance. The Dartford team (unlike all of their counterparts) had been less than welcoming – but Jess had received verbal assurance that the duo would be allowed in ‘if there was space’. 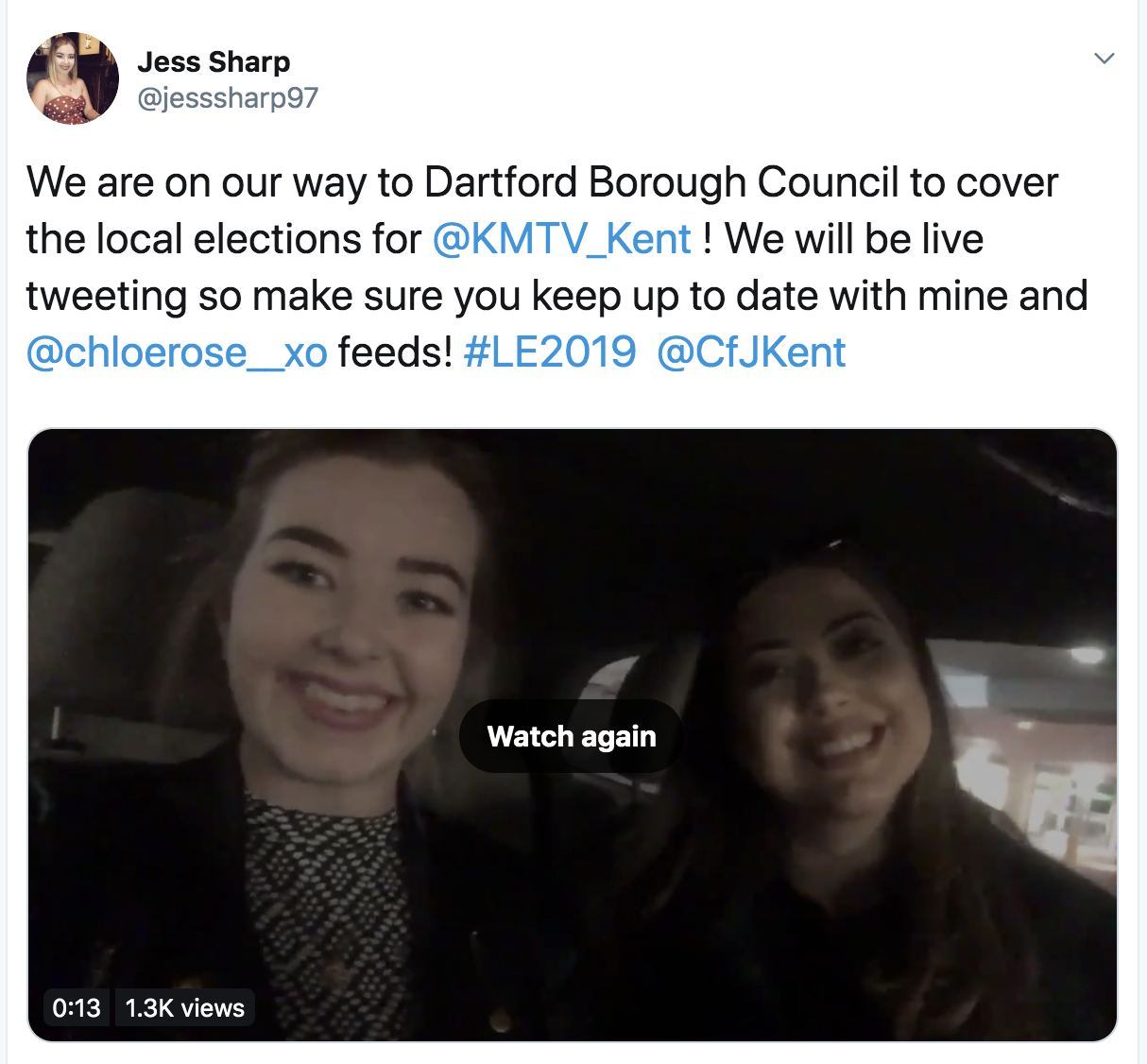 Figuring that the place was unlikely to be over-run by a massive press pack, Jess and Chloe arrived at the count. And they were right on that score at least - the only other journalist present was Dartford Messenger reporter Sean McPolin.
But what they hadn’t figured on was that a press officer would stand in the way of those who sought to bear witness on behalf of the public who pays his wages.
Mr Kirnon told them first that the ‘sensitive’ nature of the count meant that they could not go inside. Later he decided it was a health and safety issue that should keep them, and Mr McPolin, from doing their jobs properly.
But CfJ students are of course made of sterner stuff. Undeterred by this petty officialdom, Jess and Chloe chose to stay – and covered the count from the car park. They did as they had been trained to do - filming interviews, speaking to candidates (several of whom expressed surprise and support for their predicament), and keeping abreast of the numbers as they came in.
Press Gazette has covered the sorry tale, and Laura’s Twitter thread tells the story perfectly.

UPDATE: @jesssharp97 and @chloerose__xo have decided to stick around and do their jobs regardless. (It's 8°C in #Dartford in case you're interested) They've managed to interview the MP Gareth Johnson and a couple of candidates. I'M SO PROUD OF THEM. #LocalElections2019 pic.twitter.com/YjEGK18eAC

Jess and Chloe did a great job. We are proud of them, as we are of all of our students who were out and about reporting last night.
The fight for press freedom does not always take place on the frontlines of war zones, or in the dark backstreets of oppressive regimes  – sometimes it has to be fought in car parks in Dartford.