Numbers are powerful, they have meaning beyond their numerical value. Three is considered holy, thirteen is considered unlucky. Ninety-one… ninety-one is ruthless, hard-working, and it won’t take stick from nobody.

As always, all legends need an origin story, and the story of #91 is Dennis Rodman.

Rodman hasn't lived the life of most athletes, and his early life proved more challenging than that of most HOFers - many of whom often receive great help and status as sport prodigies once their skills are recognised.

Instead, Rodman had to fight for his own like not many others have to. A child of either twenty-six or twenty-eight children according to his father - or forty-seven as Dennis himself claims - he was not afforded the same luxuries and sense of belonging that children of smaller families are often able to.

Rodman’s father, Philander Jr Rodman, was a Vietnam vet who left his family when Dennis was young, choosing to move to the Philippines and create a new life for himself. As expected this shaped Rodman’s childhood and perception of himself growing up, with him evening publicly stating that “some man brought me into this world. That doesn’t mean I have a father.”

This left Dennis to live with his mom and two biological sisters, Debra and Kim. Despite being a future NBA HOFer and two time DPOY, Rodman wasn’t even the best hooper in his household growing up.

Instead, he grew up in the shadow of his two sisters who emerged as basketball prodigies from a young age, both winning three HS state national championships - Debra even went on to win two college national titles with the Louisiana Tech Lady Techsters.

After an unsuccessful highschool career in which he was cut or benched every year - with Rodman even admitting he was “unable to hit a layup” - he left without any college offers.

Rodman then went and worked as an overnight janitor at Dallas Fort Worth International Airport, where he experienced every hooper's dream - growing from 5’11 to 6’7 in a short span.

After one semester, Rodman transferred to Southeastern Oklahoma State University, where he really began to put his name on the basketball map . Across his three seasons, Rodman averaged 25.7 points and 15.7 rebounds, leading the NAIA twice in rebounding (1985, 1986), and being named an NAIA All-American all three years.

Following an outstanding run in the 1986 NAIA basketball tournament, Rodman was invited to the Portsmouth Invitational Tournament where he won MVP and impressed NBA scouts.

It was upon being drafted in the second round of the 1986 NBA draft that Dennis Rodman was really able to show the uniqueness to him and his game that made #91 special.

Rather than needing to be the most dominant two-way player on the team like he was in college - where he was once relied on to score forty-two points in an NAIA tournament game - Rodman was only needed to score more than ten points in one season (11.6 in ’87-’88).

Instead, he was able to focus solely on the two aspects of his game that he was best at but are often most overlooked - defense and rebounding.

It was here, on the biggest stage, that Rodman showed his unselfish attitude, his willingness to sacrifice his body, and scoring  - the main thing that gets you big $ contracts - for the sake of his team.

Rodman used his natural strength and instincts, as well as watching hours of footage of missed shots to see how the ball spins and where it lands, to become a force on the glass to rival only a few. Once height is taken into consideration, the 6’7 Rodman’s ability to control the boards can only be compared to fellow HOFer Charles Barkley - although I give the edge to Rodman by a decent margin.

Rodman’s prowess on the glass was so much so that he quickly earned the title ‘The Worm’ for his ability to win contested rebounds. In total, he averaged 13.1 rpg - including 4.8 offensive boards! - over his fourteen-year NBA career. By the end of his HOF career, he had amassed seven rebounding titles, all between the ages of thirty and thirty-six.

Rodman’s unmatched dedication and skill in controlling the boards is shown best by his numerous zero point, twenty-plus rebound games, a feat which has only occurred ten times in NBA history - Rodman (seven), Marcus Camby (two), and Reggie Evans (one).

Despite his dominance on the glass, Rodman also was able to be a lockdown defender in the truest sense of the term. Rodman's defensive skills were recognised by his peers and analysts alike, to the point of him earning two DPOYs (1990, 1991) and being named to eight All-Defensive Teams (seven first-team, one second-team). Despite never averaging one steal or block for a single season, Rodman’s ability to contest shots and put pressure on ball handlers made him a pest of a defender, both on and off-ball.

Rodman also possessed an unusual ability to be able to successfully guard one through five. Due to his quick feet and hands, size, strength, and unusually long wingspan (7’4), Rodman was able to be a defensive force against players of all positions. Even on the biggest stage - the NBA Finals - Rodman was trusted with, and lived up to, the task of guarding everyone from Point Guards such as Magic Johnson, to bigs like Karl Malone and Shaquille O’Neal.

It was in this regard that Rodman had his biggest impact on the game of basketball, as both his visible hustle, and eventual success, allowed him to serve as the precursor to the emergence of lockdown defenders whose ability was so recognised that they were allowed the chance to prove themselves in the NBA despite their apparent offensive ‘weaknesses’ - such as fellow HOFer Ben Wallace.

Despite all this, it can be argued that Rodman’s greatest influence isn't actually on the court. In contrast to his often quiet demeanor, Rodman has never been afraid to express himself. In a world where people were all too often afraid of how people would react to them and their views - such as Jordan’s famous refusal to back a Democratic candidate because “Republicans buy shoes too” - Rodman is unquestionably his own man.

Whilst his ‘take me as I am or leave me’ attitude has often been misconstrued as unnecessarily confrontational or over the top, in reality it was nothing of the sort. Instead, he is just a man who is unobjectively his own person, willing to be himself in a world that wasn’t always accepting - he just happened to be a superstar athlete, and so in the public eye.

From early in his career, Rodman was visibly expressive in his appearance with little regard for people’s opinion on his looks. In a ’90s era that was visibly discriminatory to many types of people who didn’t fit into society's tight standards, Rodman appeared to not care one bit. Using various accessories - piercings, hair dye, crop tops, dresses, etc - Rodman put his true self on full display for the whole world to see. 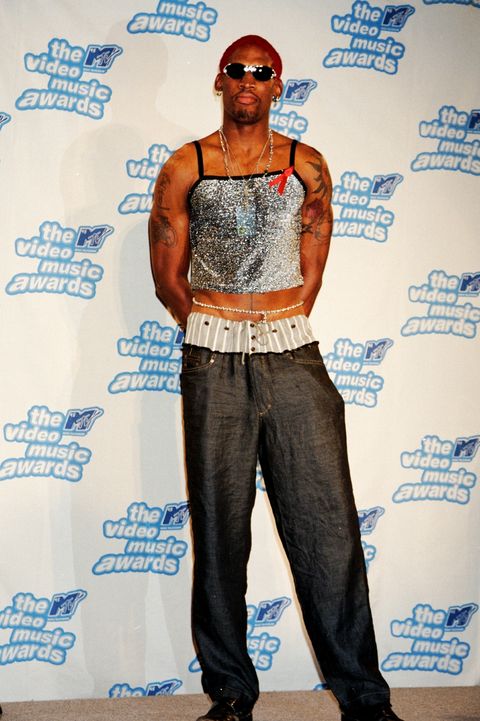 Arguably his most controversial look was in 1996, when he wore a wedding dress to a public event, declaring how he was going to marry himself. As always, people took this as an opportunity to critique many aspects of his life - his sexuality, his influence on those watching, and even his commitment to the sport he regularly was able to dominate. But rather it was that Rodman is so secure in his own identity that he is able to present it to the world unfiltered, appearing to disregard how they feel about it or himself.

Instead, Rodman began to act as an inspiration for many people - present and future - who often found themselves falling outside of society's ideas of acceptability.

Rodman opened up early discussions about gender and sexuality, and has been a vocal proponent of accepting people in sports - and society as a whole - irregardless of their personal preferences.

Even in the sport of basketball, Rodman showed that people had more to bring to the game than high scoring averages. He leads the way for generations of players who choose to focus on their strengths and are willing to do the dirty work for the team that is not always appreciated the way it should be, rather than attempting to focus on themselves and their individual stats with the intention of achieving personal glory above all else.

Thankfully we are in a place where we can still give Rodman his roses while he’s here. For many people, across many aspects of society, Rodman has acted as an inspiration. 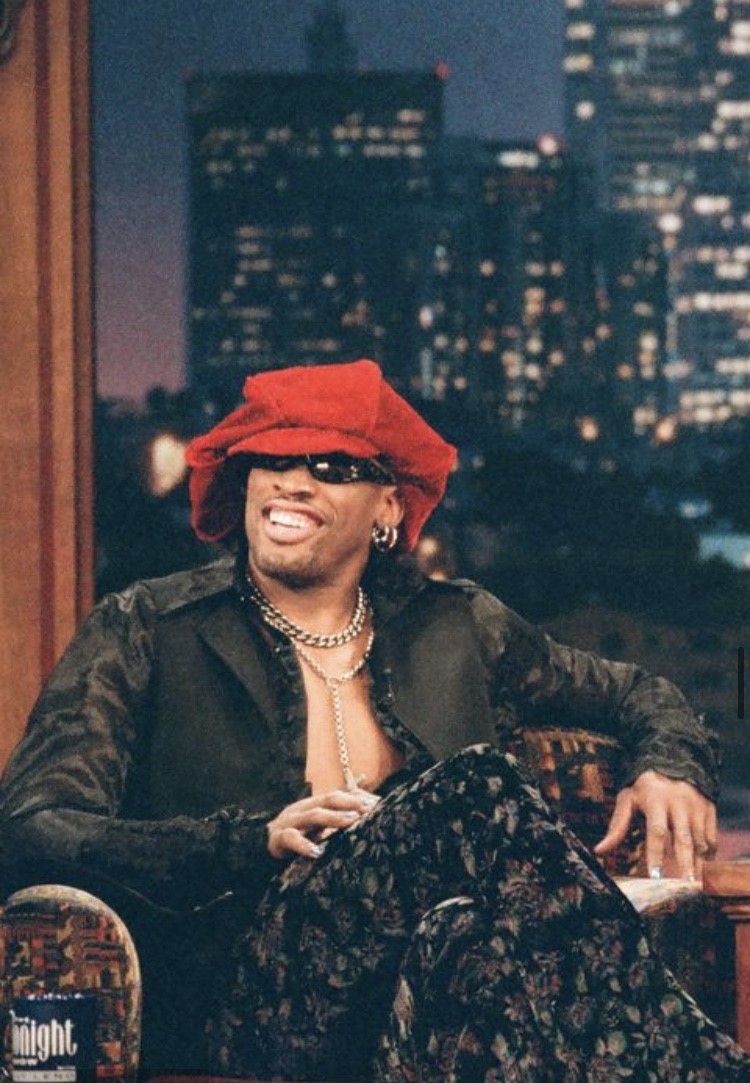